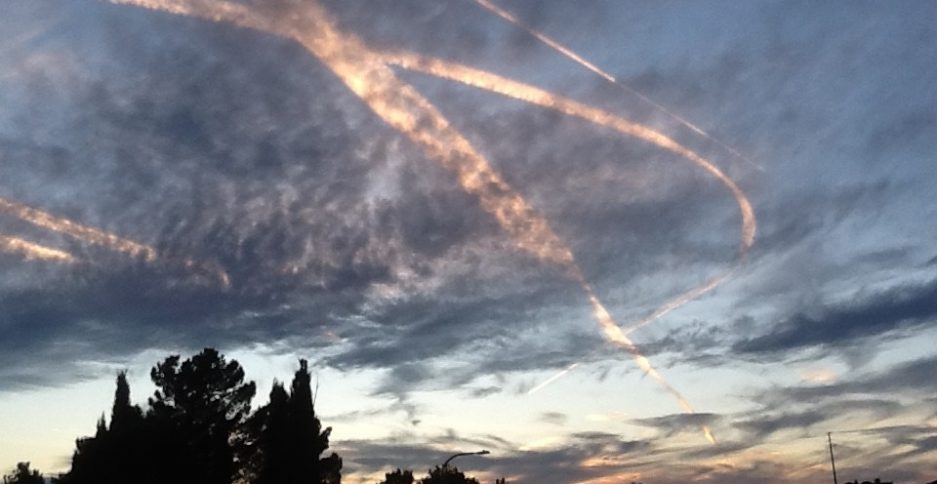 Above the high desert
in the fast-changing
light of dusk,
a silver stiletto
slices the cold clear sky.
The wound is deep,
blue bleeding a filmy rose
in the long rays of setting sun.
It spreads and thins
and wavers into vapor
far above low skimming clouds
already dark.

On the west side of the Rio Grande is Trackways National Monument, an area in the Robledo Mountains where tracks from the Permian Period are preserved. On the east side are housing developments where the desert is scraped clean for concrete foundations and asphalt.

From these greasewood hills,
looking west toward the mesa
and beyond to pale cerulean peaks,
I see the unimaginable past.
There, on ancient shores of shallow seas,
creatures more distant than dinosaurs
left their tracks.
Five-toed tetrapods inscribed
their cuneiform history of crawling up
Permian clay, dragging tails along trails
sun-dried and cracked like Sumerian tablets.
Centipedes stitched their seams
across the mud
and other bodies wiggled.
Great dragonflies touched down to sip.

From these greasewood hills,
looking east toward the mountain,
I see the all-too-imaginable present.
Here too, in ancient rocky hills, are tracks,
snaking around like trails of tails.
These trails are black.
On either side
pipes protrude and black wires,
and stakes for foundations
on ground scraped clean,
like footprints made by some unknown monster
crawling out of the shallow sea.

From these greasewood hills,
what will they see,
those who come in a future more distant
from us than we are from the dinosaurs?
Looking east toward the mountain
they will see the unimaginable past.
Buried among shattered PVC and
shreds of wire on either side
of strange black broken trails,
they will find the five-fingered print of a child
in shards of concrete, and wonder.

November,
and the urge to hunt
rises strong in the
still, cold mornings,
not to kill but capture
in my camera what’s left of fall.
There is still some yellow
along the road and on the trees,
but in the fields where grasses grow
and along the arroyos I find my quarry–
the fuzz of rabbit brush,
aster and sneezeweed
backlit against dark scrub.
I point and click and check the image
caught on the camera’s screen,
delight in the crisp connection with nature,
the backlit glory of light caught
in the seeds of weeds.
I admire the composition of forms,
the abstract aesthetics of contrast and color;
but then I know that beyond that image
is a mystery—a ritual is taking place:
the sun, like the arms of Ra on Tutankamen’s throne
with their caressing hands, blesses the seed
which rises its offering in response to grace
in this stillness before the work of winter begins.

A jagged Jurassic jaw juts into the bleeding sky.
Its maw could swallow Jerusalem
or Eden.
Its teeth could tear tyrannosaurs
and feed upon turbojets.
Of ancient magma is made its bone.
Canyons gap between its teeth.
Puny, puny are the scalers
who test their mettle against its metal,
dislodging crumbs of granite
like little birds that pick the teeth
of crocodiles.
Now at rose-colored sunsets,
mossy with pines,
drilled with mines,
prey for septuagenarian snappers,
picture takers for calendar makers,
where is your terribilità?

Driving Home in a Summer Shower

Stuffed with chiles rellenos at Chope’s,
fresh from the fields in La Mesa,
we drive home through a soft summer shower.
The gentle rain drops sun on the road
as we pass through the pecan groves
by the Rio Grande.
Leaving the verdant tunnel behind
and crossing the Rio bridge,
a vision by Maxfield Parrish–
no Grecian urns or comely maidens in chitons,
but that opalescent sky:
hints of turquoise, plum, apricot, tangerine,
the landscape puce, lavender, mauve,
shades with no names shifting
between shades.
The sunset, crimson, scarlet and orange,
fires up the Organ Mountains across the valley,
jagged peaks now flames of fuchsia.
Above, creamy cumuli suspend veils of vigas,
drifting violet.
Then suddenly in that sunny shower
a double rainbow of bright pure colors,
the source of all hues,
arcs over the valley.

I see, through branches of the
pine next door, the sunset,
no Mahleresque finale to the day
with fiery clouds rimmed with gold
but red nonetheless at the horizon
where the sun has set, and above,
for a while, green, not blue,
red and green complementing
one another
as night complements day.

Summer, I longed for you
back in the cold days in the desert
and in the sandy spring,
and I mourned your passing
when the tumbleweed
turned brown.
But now, in August,
under the surly, sultry skies
beating down heat,
melting asphalt and
resistance alike,
you’re like a thug in the street
or a guest who’s stayed too long.

A great bougainvillea rises high
against the green plastic corrugated roof.
Beneath it, cages of tropical birds:
a toucan, parrots and macaws,
a cockatoo, preening and shrieking
to entertain people waiting for tables,
tacos, and tostadas compuestas.
But we and little kids watch
the tanks of fish from the Amazon,
like lobsters displayed for dinner.
Can we order one of these? one asks,
eye to eye with piranhas,
their shimmering skin,
tiny hateful mouths
and huge hungry eye
questioning in turn,
podemos encomendar um desses?Sin Fronteras, Writers Without Borders, No. 22, 2017

Ravens at the Rim

We stand on the rim of the Grand Canyon
on a glorious high-altitude summer day,
sun-warmed, air-cooled, cumulus clouds passing
through the transparency of the deep blue.
Intoxicating–the clarity, the light,
the high dry air and the scent of pines.
Overwhelming–the vastness, the colors,
the depth, the distant sounds of water and air.
We are in a state of wonder,
experiencing in our modest way
the sublime.
Then unexpectedly, and right in front of us,
a big black shape floats up, almost at arm’s reach–
a raven, wings outspread like a black kite.
We refocus sharply on this bird and feel a new,
more intimate sense of wonder
as another raven floats up, effortlessly,
wings outspread, followed by a third!
I look over the rail and see, far down,
a small flock of ravens assembling,
finding their place in the elevator of air
that rises warm against the cliff.
The first ravens, high above, are plummeting down
to catch the updraft again.
We watch this spectacle of birds at play,
rising and diving as on a carnival ride,
amused and marveling at their clever abandon.
But I sense something more,
that they are the canyon too, as the rock
and the river, the currents of air
and the steep cliffs are the canyon,
their wildness remote and distant
from us as the chasm itself,
that they are an animate manifestation
of the vast inanimate deep,
the soul of the canyon speaking in a
whisper of ravens.

Reading Wallace Stevens in the Shade

So this is life, then,
a deck chair, a lemonade,
reading Wallace Stevens in the shade.

For such moments do we trade
our youth and middle age.
The day is green.

The only moving thing is a leaf,
disturbed by a butterfly in another dimension
(There are eleven.)

Orisons of orioles
and the green freedom of hummingbirds,
pyrrhuloxias in the piñon,

quail calling in the creosote:
for such moments do we long and wait
a lifetime’s drudge, and now appreciate.

Here are links to other sections